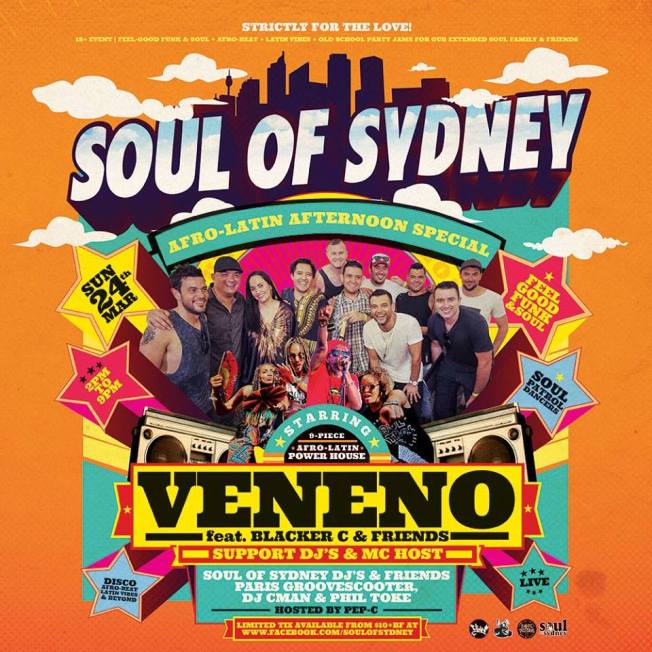 SOUL OF SYDNEY: are a grassroots collective who are bonded by a love of ‘FUNK’ & ‘SOUL’ based music in all its forms.  A creative family of DJ’s, Dancers & Artists working to promote and support the music they love as well as the culture around it.

From humble begins in 2009 launching as a blog, it was not long before the collective took a chance on a sunny Sunday afternoon to throw a one-off secret Sunday afternoon picnic over 6 years ago. Setting up turntables and a renegade sound-system in a park in the inner west Sydney with a simple idea to bring FEEL-GOOD FUNK & SOUL music in an atmosphere where people had the freedom express themselves, where dancers connected with DJ’s and DJ’s had the liberty to play anything they were feeling.

Inspiration – Taking musical inspiration from across Hip Hop, Disco & House scenes, seminal DJ’s, parties & clubs from 70’s, 80’s such as; David Mancuso’s The Loft (NYC), Larry Levan’s and Paradise Garage, Kool Herc’s Block Parties, Ron Hardy, Grandmaster Flash and Frankie Knuckles as well as encouragement from current esteemed music events such as New York’s ‘Body and Soul’, LA’s ‘The Do Over’ and UK’s Southport Weekender. The Soul of Sydney family felt the importance of taking things back to the roots of those musical scenes with anything they put their name to.

The Soul of Sydney’s distinctive character of dance-floor expression, crowd participation and an inclusive party environment has seen the events really take on their own feel over the last 7 years.

A delicate approach to getting down where DJ’s, Record Collectors, B-boys & B-Girls, and Musicians from difference culture, age brackets and social scenes can meet away from the usual late night bar and club situation. They meet on a dance floor to connect through music on a dance floor to celebrate music’s uniting power. With positive party vibes encouraged, you can anticipate all kinds of dance floor fun including crowds that get down with classic Soul Train lines, Boys, Breakers, Poppers and Lockers getting down, Roller Boogie Flash Mob dancers and even the odd limbo lines or group jump rope on the floor.

Six years on their open musical ideas have not changed, focused highlighting ‘feel-good’ funk vibes in all their splendour, you can expect DJ’s to dig deep in their crates and pull out all kinds of gems from Afro-Beat, Latin-Funk, New York Disco, Roller Boogie, to early Chicago House, classic 90’s Hip Hop joints & beyond at the jams.

Always moving forward with a smile the last few years have defiantly been a blessed for Soul of Sydney since that first picnic back in 2011. They have been asked to bring their own unique brand of Funk party as part of a host of some of the largest well-established festivals in Sydney, including Sydney Festival (2015, 2016,17), Sydney Fringe Festival, Vivid (2015,2016.2017), Soulfest, The African Film Festival, just to name a few.