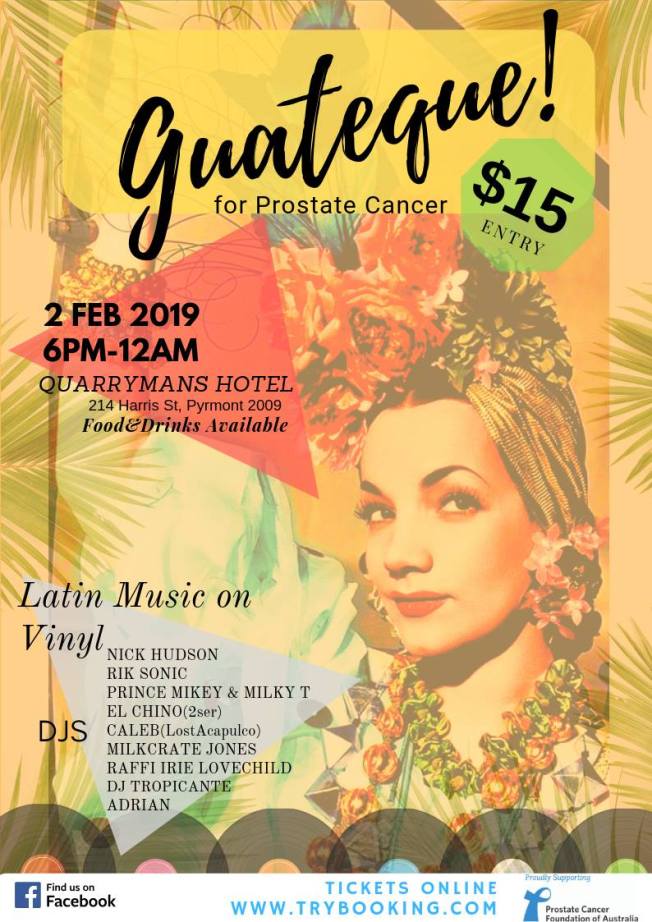 *MILKY T
Visual artist, dreamer and maker of things.
Resident on the decks for Queen Bee @ Hive Bar: a regular night of ladies playing vinyl only.

*PRINCE MIKEY
Passionate record collector and resident DJ in the Northern Soul club, The Sweetest Feeling. Also with appearances in Soul weekenders around Australia with a great selection of Soul & Funk.
You can also find him playing records on a Wednesday night @ The Hive bar in Erskineville.

*CALEB
Admired Musician from Mexico currently playing in Los Tremoleros in Melbourne, making his first appearance in Sydney on the decks!
Bass player from Lost Acapulco surf band who’s last performance in November filled up the Zocalo Capitalino in México DF, he is bringing us a great variety of cumbias.
He has played along side Daddy-O Grande and many more surf music legends.
http://www.lostacapulco.com/

*DJ TROPICANTE
Guitarist and co-founder of CUMBIAMUFFIN, with a great ear for Latin Music. Colombian born Carlos Arango (aka Tropicante Sound Sistema), is a member of Sydney’s underground DJ collective Pineapple Republic, and a well-renowned selector, event promoter and host of some of the most iconic Tropical nights around the best venues in Sydney, exposing people to the new wave of Latin, Caribbean and global beats that are still fresh to Sydney’s night life.

Part of Tropicante’s credits include hosting events with internationals like Quantic and Daniel Haaksman.

*ADRIAN
His main thing is Reggae, collecting records since the early 90’s.
Was part of the Firehouse crew in the late 90’s but also loves latin music – especially 60’s & 70’s Salsa Dura from NY and Colombia.

*RAFFI LOVECHILD
Music connoisseur, collector of great vinyl, who has played for Jennifer Lopez.
You might have seen him also @ The Hive Bar, and playing in Gonzo’s night on Saturday nights at the Bank Hotel in Newtown.