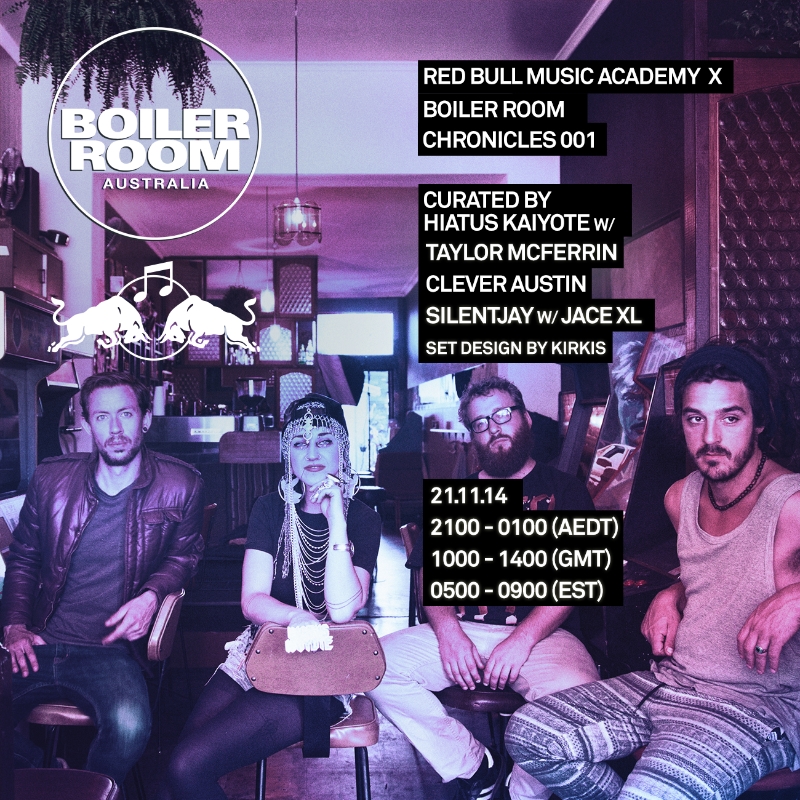 Boiler Room TV – the biggest underground music show on the planet – will be returning to Australian shores in 2014, partnering with Red Bull Music Academy for a unique series designed to shine a spotlight on some of our finest home-grown talent and their musical influences from across the globe. Kicking off in Melbourne on Friday Nov 21, “Chronicles” will focus on one prominent Australian artist or group, allowing them to take over the reigns for their own Boiler Room session, curating a line up of artists past and present who have inspired the development of their distinct sound.

To launch the series, Red Bull Music Academy andBoiler Room Australia have invited Grammy-nominated, polyrhythmic neo-soul quartet, Hiatus Kaiyote, to become curator for the Melbourne event. Every so often a band comes along that captures the collective imagination and after being noticed by Taylor McFerrin whilst on his tour of Australia, word spread like wildfire leading to a swag of awards in 2013 including Best Breakthrough Artist at Gilles Peterson’s Worldwide Awards, as well as nods from soul royalty (Prince, Pharrell Williams, Erykah Badu, Ahmir “?uestlove” Thompson, Common, DJ Jazzy Jeff). With support of that calibre it’s no surprise the band were nominated for a Grammy in 2014 (The first time an Australian artist was nominated in a RnB Category – Best RnB Performance for “Nakamarra” feat.Q Tip from A Tribe Called Quest), played for Jay Leno on The Tonight Show and were the highlight of Red Bull Music Academy’s stage at Splendour in the Grass in 2014.

The band’s connection to “Chronicles” headline act Taylor McFerrin has continued to grow since that chance meeting – Nai Palm even went on to feature on “The Antidote”, a highlight from the producer’s critically acclaimed album “Early Riser” released on Flying Lotus’ Brainfeeder label. The Brooklyn-based producer, composer, pianist, DJ and live musician (and eldest son of the legendary Bobby McFerrin) is equally influenced by the legends of 60s/70s Soul, the kings of the modern beat generation, golden era hip hop, free form jazz and electronic music. Since creating a major buzz with his first EP, “Broken Vibes”, McFerrin has toured worldwide as a one man show, playing major festivals such as Lollapalooza, Glastonbury, The Big Chill, and Gilles Peterson’s Worldwide Festival, as well as opening for artists such as Erykah Badu, The Roots, Nas, Talib Kweli and Robert Glasper.

Also performing at Boiler Room’s biggest Australian show to date will be a mixture of long time collaborators and local friends of Hiatus Kaiyote, Clever Austin, Silentjay w/Jace XL, along with a set created and designed especially for this event by Kirkis.

The partnership with Boiler Room Australia is a natural one for Red Bull Music Academy, which has taken its series of music festivals and workshops to cities around the world over the last 15 years, with previous stops including Tokyo (current), NYC, Toronto, London, Madrid, Melbourne, and Cape Town. Further, the Academy has extended its curatorial touch to the online radio station, RBMA Radio, and to festival stages and signature events on every continent.

Evolving from the UK’s rich pirate radio heritage, Boiler Room has grown from a webcam taped on a warehouse wall to become the definitive showcase of new music worldwide. In just four years, Boiler Room has weaved itself into the fabric of dance music culture, boasting an envious back catalogue of era-defining sets from the likes of Jamie XX, Thom Yorke, Nicolas Jaar, Skream & Disclosure (b2b) and ?uestlove, along with Australia’s own Chet Faker, Oscar Key Sung, Andras Fox and Fantastic Man.

Red Bull Music Academy x Boiler Room Chronicles events will be held in a secret location (chosen by the band) and are private, RSVP guestlist only affairs – RSVP HERE. A limited numbers of tickets will be given away via the RBMA Facebook Page closer to the event. Those not able to squeeze into one of the events can of course check out the live-stream on www.boilerroom.tv/chronicles.