Fever In The Road Tour

The Bamboos, who redefined Australian Soul music in the 2000’s, hit the road this November and December with a genre-defying new album that solidifies their reputation as harbingers of musical evolution. Niche is proud to present The Bamboos’ Fever In The Road tour, playing dates across the country the band will be show casing all new tunes from their upcoming album as well as playing selections from their renowned back catalog.

In between the band continued to set in stone their reputation as one of Australia’s most incendiary live acts with appearances at Splendour In The Grass, Bluesfest, WOMADelaide, Falls Festival, Homebake and the national ‘Rock ‘N’ Soul Medicine Show’ tour with Tim Rogers.

Like its predecessor, the band’s sixth album ‘Fever In The Road’ was co-produced by ARIA- nominated, multi-instrumentalist studio wizard John Castle – whose work with the likes of Washington, Josh Pyke, Gossling, Pez and Kate Miller-Heidke has ranked him amongst the first-call producers in Australia. The new record sees Castle and Ferguson venturing into sonic landscapes The Bamboos have previously touched on but never fully inhabited. There is a sense that the music is leaner and more muscular, yet upon closer inspection the tracks reveal themselves to be densely multi-layered in a ‘Wall Of Sound’ style. And it’s this aural complexity and depth that allows darker moods to roam through the album, taking their sound to a new place. The songs career from the wondrously anthemic (the lead single ‘Avenger’, ‘The Truth’, ‘Rats’, ‘Jump My Train’), to the dreamy and psychedelic (‘Looking West’, ‘Harbinger’) and the darkly fragile (‘Killing Jar’, ‘Before I Go’).

Don’t miss the opportunity to see one of Australia’s most lauded live acts, as they play coast to coast with their fantastic new album in tow. 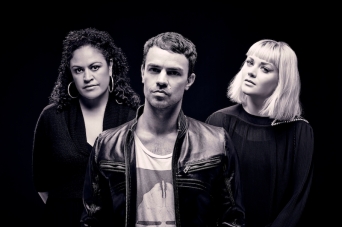