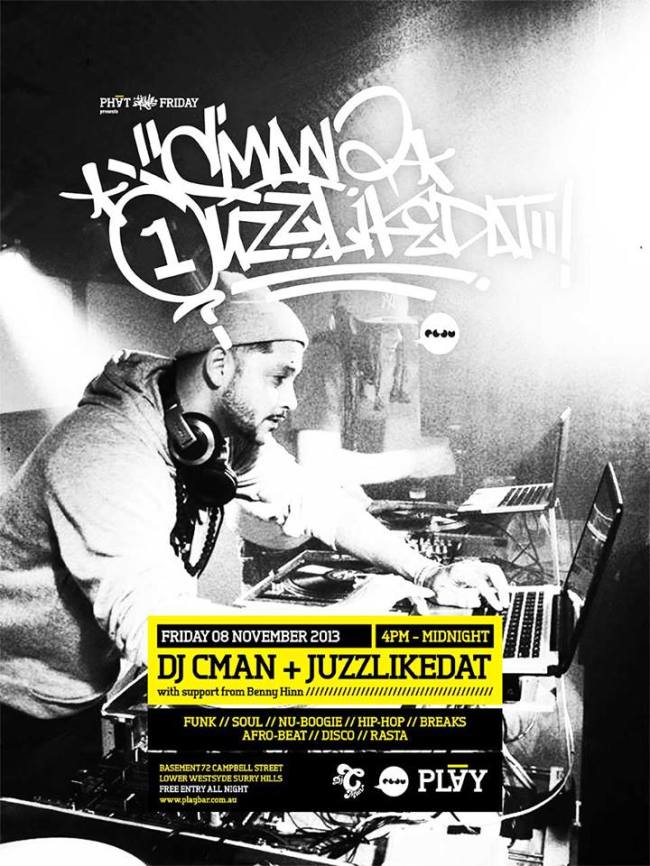 DJ’s CMAN & JUZZLIKEDAT’s afro inspired grooves have been sweeping Sydney with nothing but good vibes over recent years.
The guys play host to a stack of great nights around town, such as, “Everyday People” at the Tatler, “Good Good Music” at Cafe Lounge, plus often feature for events at the Basement, Oxford Art Factory, and Ching-A-Lings; as well as Soul of Sydney block parties, and gigs for Funkdafied, and Grindin’.

On Friday the 8th of November 2013, PHAT PLAY FRIDAY presents these two premium DJs, for a night of dope beats, ranging from hip hop and dance floor jazz, to boogie, funk, soul, disco… Check it

CMAN has worked in the music industry for over 10 years and performed at Sydney’s most established venues and events including Home Night Club, Oxford Arts Factory, The Basement, Blue Beat, Four Seasons Hotel, The Cafe Lounge, Ching-a-Lings, the infamous Soul of Sydney Block Parties plus events for Funkdafied & Grindin’.

He has played live on numerous radio stations including 2SER and Bondi FM, and supported touring international artists such as Eric Benet, Eric Lau and DJ Sarah Love.

Outside of Sydney CMAN has rocked crowds from the VIctorian snow fields to playing internationally in both Europe and South East Asia.

The son of an ex-record shop owner, it comes as no surprise the path that he would follow. With residencies across Sydney at some of the coolest underground bars to ritzy five star hotels; CMAN’s dynamic skills, musical knowledge and versatility make him an instant crowd favourite.

Rooted heavily in Soul, Jazz and Latin music from childhood, CMAN also grew up on a steady diet of Funk, R&B and Hip Hop. Today he enjoys fusing these influences into his sets with a fine tuned ear and the ability to seamlessly transition through genres; taking patrons on a soulful journey from Funk to Bossa, Reggae to Disco, Hip Hop to Boogaloo and all things in between.
SPECIALIST GENRES:

Le Garage crosses over as a records store, hair salon and accessories retailer as well as art gallery (and occasionally turning into a music lounge too). With a funk, hip hop & soul sensibility second to none, Juzzlikedat will keep you noddin’ with agreement that yeah, yo, it should be just like that…s’il vous plaît!