The time has come for the world of Hip Hop to unite under one roof. No, this isn’t a special United Nations charitable benefit, but more a United Nations of Benetton Hip Hop show in Sydney! Sydney label Grindin’ has once again stepped up to the plate providing Sydney with QUALITY Hip Hop acts. If you’re not familiar with Detroit’s APOLLO BROWN, keep busy and check the links out. All artists on the bill have a heavy jazz and soul influence so expect a unique sound heard on the night. The sound of boom-bap is heading to Sydney on the 30th of November @ The Civic Hotel!

Apollo Brown is not your typical soul funk influenced producer. Growing up listening to soft rock music from the 60’s and 70’s such as Seals and Croft, Journey and The Carpenters, Apollo Brown has kept his influences broad and independently his own, not what his peers were commonly influenced by.  Apollo is best known as the go to producer in the Motor City Hip Hop circuit and has collaborated with artists such as Danny Brown, Oddisee, Diamond District, Rapper Big Pooh of Little Brother, Black Milk, MED, Grap Luva, Kenn Starr, Finale, Magestik Legend, Paradime, and many more.
Having signed to Mello Music Group his album projects include “The Reset”, a series of reworked tracks in true remix tradition, “The Brown Study” as half of a collective with Boog Brown, and the “Gas Mask” LP as one-third of The Left with DJ Soko and Emcee Journalist 103. An LP which garnered respect from Hip Hop legends such as DJ Premier, who named it in his top albums of 2010 list.
In 2011, Apollo started a highly anticipated year off with the instrumental album “Clouds”, that was a being named to several relevant top 10 lists for the year and another collabo album called “Daily Bread” with New York emcee Hassaan Mackey.
2012 has been a massive year for Apollo releasing his most recognized work so far, the collabo LP “Trophies” with DITC founder/head member, the legendary O.C. and “Dice Game” with Detroit’s own Hip Hop heavyweight and J.Dilla protege Guilty Simpson.
Apollo’s credo is simple: “Everything I make, I try to make it my favourite album of all time.” He is building on the foundation laid down by Nas’s “Illmatic” and Black Moon’s “Enta Da Stage” in hopes of taking it one step further, and most important, is past the trepidation felt in the past. Radio is good, but Apollo’s music is for the children of the underground.
BRIDGE THROUGH TIME
ALUBM: CLOUDS (2011)
HUNGRY featuring Big Pooh, Blackmilk
ALBUM: RESET (2010)
WE THE PEOPLE
ALBUM: TROPHIES (2012)

Fresh off a 40 plus date tour of America David Dallas will be performing an exclusive set including tracks from his new release “Buffalo Man” EP which has all the songs inspired by, sampled or interpolated from Jamoroquai.
BIG TIME
ALBUM: SOMETHING AWESOME (2010)

P-Money is New Zealand’s most renowned Producer/DJ. His incredible talents in the studio and behind the decks have made him not only a household name in NZ but an artist to watch internationally.
SUFF DADDY (GERMANY/MPM)
With his drunken boom-bap madness with a 2010 state of mind. Dope beats, sick samples and twisted mini-korg licks, fueled with weed and Pilsetten. This is not your average Prenzelberg producer. Germany’s Suff Deezy is on his own shit.
5 O’CLOCK
THE GIN DIARIES
LOVIN’ YOU/SUFF DISCO/TAKE ‘EM TO THE KIOSK
ALBUM: SUFF SELLS
CHASM FEAT. SPECIAL GUESTS
Chasm is one of the leading Hip Hop producers in Australia, signed to Obese Records. His new album “This Is How We Never Die” features a host of Australian and international artists such as Guilty Simpson, AG, Fashawn, Blak Twang, Solo, Hau,Brad Strut, Delta and many more
METAMORPHED TONGUES
CHASM EP 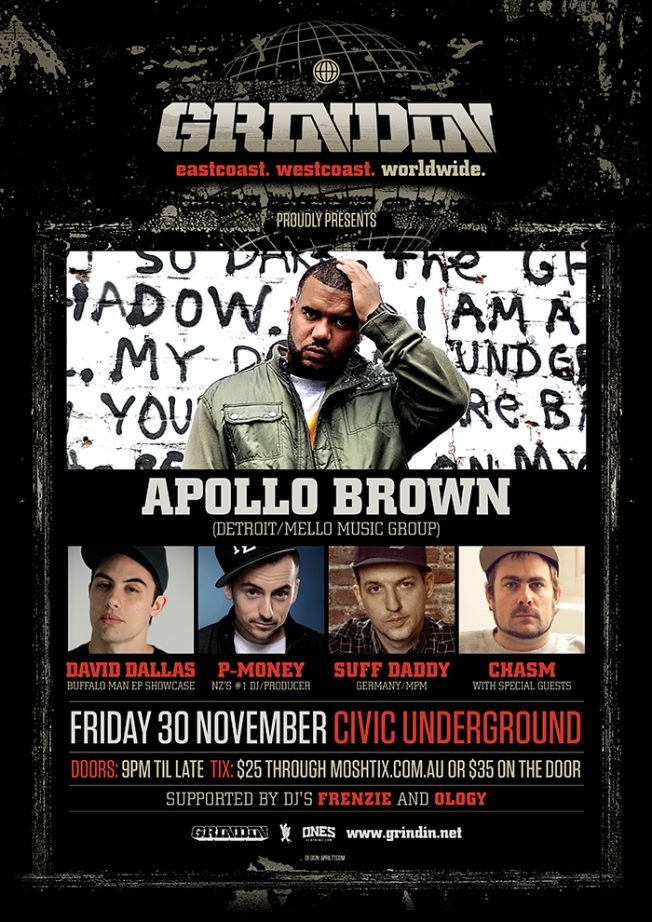