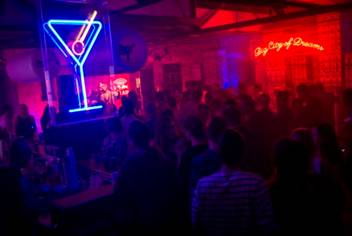 The New York City skyline came to life on the top floor of Red Bull’s HQ in Sydney last night for a celebration of the past, present, and future of the Red Bull Music Academy, which lands in NYC in April 2013.

The star of the show was Madrid 2011 graduate Jesse Boykins III, who with fellow New York resident MeLo-X showcased the future soul sounds of their Zulu Guru long-player on Ninja Tune alongside material dating back to 2008’s Tabloids. MeLo then stepped forward from behind the decks and brought a Brooklyn block party feel to the party, moving through tracks from the likes of Biggie Smalls and The Weeknd before Jesse re-joined him for an encore of Lana Del Rey’s Video Games.

The night’s entertainment was topped and tailed by Australia’s RBMA 2013 participants, Julien Love laying down a smooth selection of disco and house on warm up, then Kloke showcasing some of his recent bass music concoctions to close. While the music flowed freely from on stage, Sydney’s media and music people got a taste of New York City as the manhattans, macaroni cheese, pretzels and pizza flowed just as freely.

The night might be over, but the NYC apartment buildings, subway signs, and bright neon lights of the big city will remain until the next invitation goes out to visit the ‘Big City of Dreams’.

Red Bull Music Academy was founded in 1998 and touches down in a different city each year. Over two fortnight-long ‘Terms’, some of the world’s finest purveyors of rhythm and sound gather inside the Academy’s walls. Two groups of successful applicants, themselves representing a diverse range of music styles and methodologies, attend lectures by musical pioneers, and work on their own tunes in custom-built studios. By night, they have the chance to perform in some of the host city’s finest clubs and concert halls.

RBMA 2013 takes place in New York City, one of the most iconic cities on the planet. NYC has been immortalised in the pantheon of music, incubating genres like hip hop, disco, house, bop, no-wave, and post-punk among others. NYC is inspiration central: a place where people from all nations collide, bringing music, culture, and attitude with them.

Flying in from 29 countries and six continents, 62 participants will attend RBMA in New York City from April 28 to May 31, 2013.

Download every Various Assets – Not For Sale compilation of tracks produced at RBMA from Seattle 2005 onwards: http://rbma.bandcamp.com/