April 5, 1968. It is the day after one of the most catastrophic moments in the history of the civil rights movement.

The film documents that remarkable concert and the politics around it. Boston Mayor Kevin White and his colleagues almost by accident realized that by televising the James Brown concert they could keep people indoors that night prevent widespread rioting. The film is almost testimony to the power of music in general and the power of James Brown’s music in particular. The film is a tribute to the Godfather of Soul and the role he would come to play in working for civil rights.

Backstage at the Boston Garden, the mood is somber, appropriately funereal. Just 24 hours ago, Martin Luther King, Jr., the most important and beloved African American leader in America, has been assassinated, and though James Brown is booked that night for a show, nobody really wants to go onstage and play.

On the morning after the assassination of Dr. Martin Luther King, Jr., city officials in Boston, Massachusetts, were scrambling to prepare for an expected second straight night of violent unrest. Similar preparations were being made in cities across America, including in the nation’s capital, where armed units of the regular Army patrolled outside the White House and U.S. Capitol following President Johnson’s state-of-emergency declaration. But Boston would be nearly alone among America’s major cities in remaining quiet and calm that turbulent Friday night, thanks in large part to one of the least quiet and calm musical performers of all time. On the night of April 5, 1968, James Brown kept the peace in Boston by the sheer force of his music and his personal charisma.

Brown’s appearance that night at the Boston Garden had been scheduled for months, but it nearly didn’t happen. Following a long night of riots and fires in the predominantly black Roxbury and South End sections of the city, Boston’s young mayor, Kevin White, gave serious consideration to canceling an event that some feared would bring the same kind of violence into the city’s center. The racial component of those fears was very much on the surface of a city in which school integration and mandatory busing had played a major role in the recent mayoral election. Mayor White faced a politically impossible choice: anger black Bostonians by canceling Brown’s concert over transparently racial fears, or antagonize the law-and-order crowd by simply ignoring those fears. The idea that resolved the mayor’s dilemma came from a young, African American city councilman name Tom Atkins, who proposed going on with the concert, but finding a way to mount a free, live broadcast of the show in the hopes of keeping most Bostonians at home in front of their TV sets rather than on the streets.

Atkins and White convinced public television station WGBH to carry the concert on short notice, but convincing James Brown took some doing. Due to a non-compete agreement relating to an upcoming televised concert, Brown stood to lose roughly $60,000 if his Boston show were televised. Ever the savvy businessman, James Brown made his financial needs known to Mayor White, who made the very wise decision to meet them.

The broadcast of Brown’s concert had the exact effect it was intended to, as Boston saw less crime that night than would be expected on a perfectly normal Friday in April. There was a moment, however, when it appeared that the plan might backfire. As a handful of young, male fans—most, but not all of them black—began climbing on stage mid-concert, white Boston policemen began forcefully pushing them back. Sensing the volatility of the situation, Brown urged the cops to back away from the stage, then addressed the crowd. “Wait a minute, wait a minute now WAIT!” Brown said. “Step down, now, be a gentleman….Now I asked the police to step back, because I think I can get some respect from my own people.”

Brown successfully restored order while keeping the police away from the crowd, and continued the successful peacekeeping concert in honor of the slain Dr. King on this day in 1968. 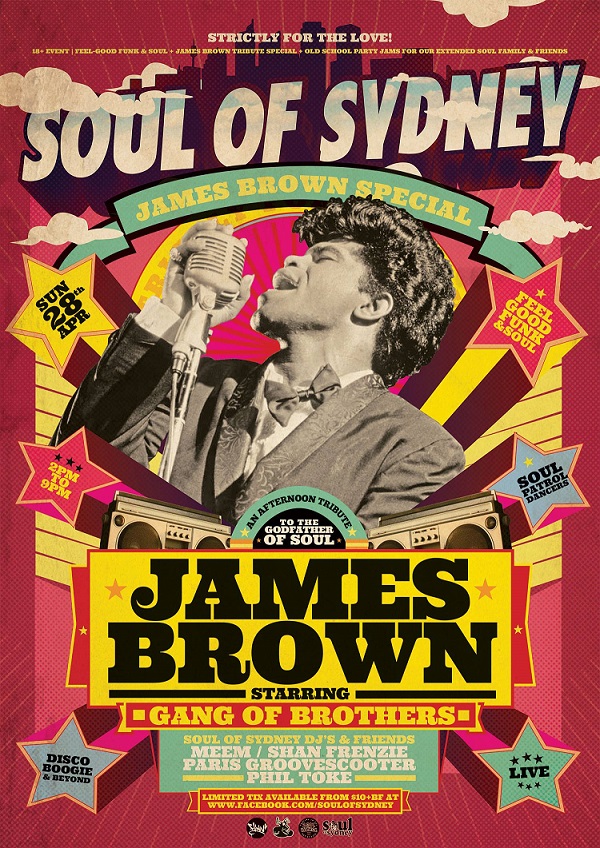 An afternoon homage to one of the central figures who shaped FUNK & SOUL music as we know it and inspired GENERATIONS of MUSICIANS, DJ’S & PRODUCERS.