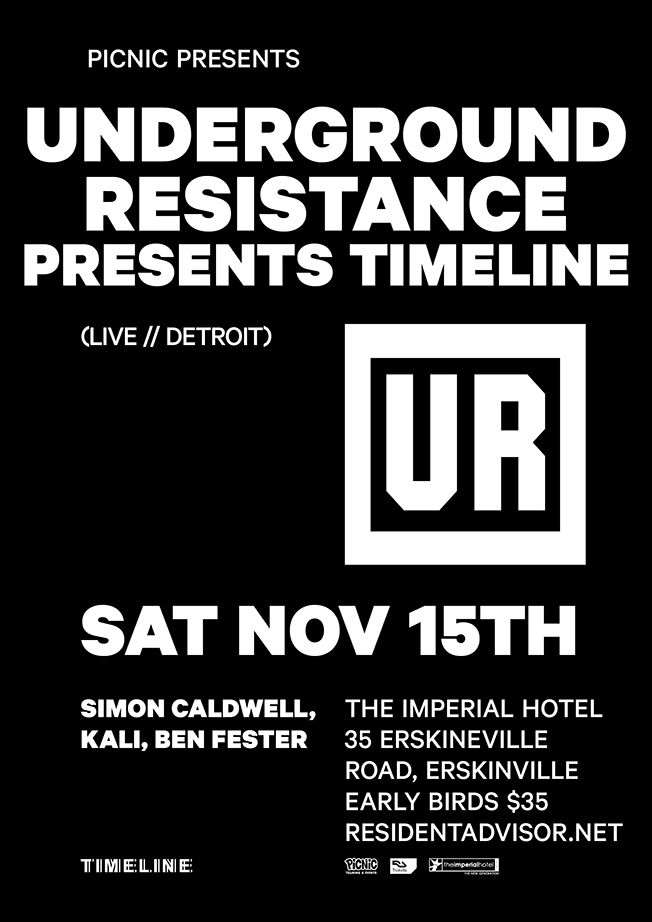 The Underground Resistance collective, started by Detroit second-wave trinity Jeff Mills, Robert Hood and Mike Banks in 1990, has become a living representation of the original spirit of techno: a music that looks to the future, that is underground, experimental and radical in its aesthetic and technological vision. This is the sound that was born in a city dominated by the robots of the automotive industry. This is the sound of a reality and not of any science fiction fantasy. A sound born in a city with a rich and unique musical history: grooved by jazz, awakened by Motown rhythms, sophisticated by soul and brought together by techno and hip hop – and still vibrant and essential to the present day world musical map. In their current live set-up, Underground Resistance is led by Mike Banks on keyboard duties, and includes an ensemble of Jon Dixon (also on keyboards), De’Sean Jones (saxophone) and DJ Mark Flash. Underground Resistance Presents Timeline Live – an adventure through the musical mazes of Detroit, between jazz and techno, between the past and the future.

They’ll be gracing the stage of the Imperial Hotel, bringing 25 years of dance music history to a Picnic night not to be missed. Support from three of Sydney’s own legend-status DJs: Simon Caldwell, Ben Fester and Kali. The music starts at 10pm and stops with the rising of the sun.