SYDNEY, November 2013: A Sydney lyricist and recording artist has launched a new performance concept where Hip Hop and poetry meet and merge into something he calls Speech Therapy.

The Tongue (AKA Xannon Shirley) says the aim is to promote the language of today’s youth in a way that showcases the creative skills of Australia’s proven, and aspiring, poets, rappers and writers.

The third edition of his monthly Speech Therapy performances will take place from 8 pm on Thursday 21 November at the Art & Life Work-Shop at 86 Broadway, Chippendale.

The program will feature the former Australian Poetry Slam Champion, Omar Musa, Spit Syndicate’s Nick Lupi and the founder of independent recording label and The Herd, Urthboy, all of whom are well established on the Australian scene.

The Tongue contends that Hip hop now is the most politically and socially aware musical genre, invariably reflecting what young people are concerned about today.

He says that like many of his contemporaries, his three albums – the latest of which is Surrender To Victory – focus on the strength of the lyrics to deliver his own messages, but adds that the underlying aim is to promote the enjoyment of the language and how it is used.

The Tongue’s commitment to the genre, combined with his love of language, led him to undertake a second degree – a Masters of Teaching (English, Society and Culture and Geography) – which he has just completed at Sydney University. 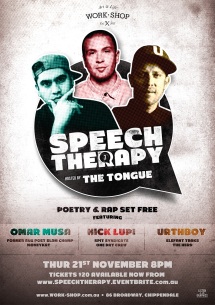