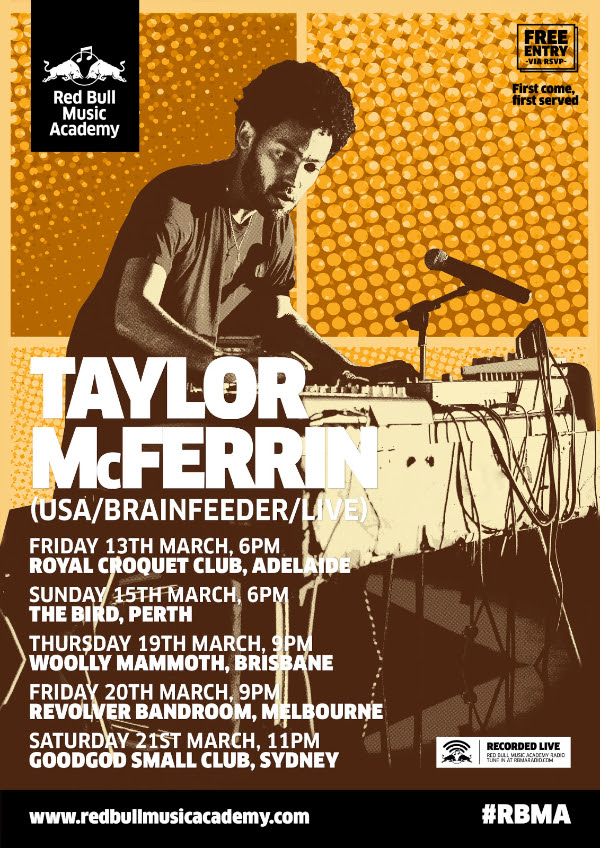 With Pitchfork describing the aforementioned LP as “Undeniable beauty” and The Times deeming it as “A sliver of intricate, sun-dappled, jazz-soaked electronica” – expect to be blown away by the multi-instrumentalist that not only stole the hearts of Australia’s own Hiatus Kaiyote, but has been praised by the likes of Prince, Pharrell Williams, Erykah Badu, Ahmir “?uestlove” Thompson, Common, DJ Jazzy Jeff.

Those who witnessed Taylor take the stage at last year’s event will know something special is in store – he will be delighting crowds with a solo execution of his much-praised debut album “Early Riser”, in a series of performances that are sure to go down in Red Bull Music Academy history.

Influenced by a myriad of musical styles, this genre-defying producer blends anything from 60/70s soul, to modern era hip-hop, free form jazz and electronic music. In his solo live performances, McFerrin has found a sound that seamlessly bridges musical worlds, creating something that is instantly identifiable and entirely unique to the Brooklyn-based producer.

Since creating a major buzz with his first EP, “Broken Vibes”, McFerrin has toured worldwide as a one-man show and has played major festivals such as Lollapalooza, Glastonbury, The Big Chill, and Gilles Peterson’s Worldwide Festival. In his home base of New York City, he has performed at legendary venues like The Apollo, The Blue Note, Radio City Music Hall and The Lincoln Jazz Center opening up for artists such as Erykah Badu, The Roots, Nas, Talib Kweli and Robert Glasper.

In addition to producing and performing, Taylor has served as the head Instructor of the pioneering Beat Rockers program over the past 4 years, teaching beatboxing and musical self-expression to students who are blind and/or have multiple disabilities at the Lavelle School for the Blind in the Bronx. A deep-rooted, unparalleled passion for creating and sharing music is a trait that is certainly conveyed in his music.

In celebration of its 15th anniversary, Red Bull Music Academy has teamed up with award-winning director Ralf Schmerberg to create a full-length feature film.

Entitled What Difference Does It Make? A Film About Making Music, the film featuresBrian Eno, Lee ‘Scratch’ Perry, Giorgio Moroder, Nile Rodgers, Richie Hawtin, James Murphy and many more talking about the ups and downs of a life devoted to music. Shot at the 2013 Red Bull Music Academy in New York and produced by Schmerberg’s Berlin based artist collective Mindpirates, the film focuses in on the creative process – but ends up asking questions about life itself.

What Difference Does It Make? evokes the heady atmosphere of the Academy itself, in which fresh musical ideas tend to spark between artists representing different genres and generations. In a different city each year, 60 up and coming musicians from around the world participate in workshops with musical luminaries in a custom-fitted complex of studios and workspaces. By night, they perform in the city’s cult venues and concert halls, alongside contemporary and classic innovators as well as heroes and heroines of the local scene. Long after the last notes are played, the experiences and insights gained there tend to resonate deeply in the lives and practices of those who take part.

What Difference Does It Make? premieres in movie theatres across the globe on February 17. A day later, it will be available to view for free via redbullmusicacademy.com. Check the trailer below.

“I was blown away by the whole set-up, and the way the Academy serves to document music /DJ culture in the process.”– Greg Wilson, Lecturer, Melbourne 2006.

Since Tuesday July 9, 62 lucky DJs, producers, vocalists and multi-instrumentalists from across the globe have received email confirmation that they’ll be headed to Red Bull Music Academy in New York City this northern autumn – and two of the lucky golden ticket winners will be flying to NYC from Melbourne.

Andy Donnelly (aka Kloke) and Julien Love will each experience two weeks of music making utopia, where like-minded and forward-thinking producers, instrumentalists, vocalists and DJs from every conceivable genre come together for intensive semesters of workshops, concerts,

club nights and studio time which relegate sleep from one of life’s necessities to an optional extra.

to be postmarked by April 2. The last application we received with a valid postmark arrived on June 17.

named Lars answered 1,439 questions via e-mail during the application phase – his personal record.

members of our data entry team represented six different nationalities. They all typed in excess of 55 words a minute.

the Keanu Reeves classic Speed as their favourite film of all time.

· A disturbingly high percentage of applicants filled out their applications in mirror writing.

common Marvel Comic book character the applicants wished to be was the Silver Surfer. The least common was Pip The Troll.

Brian Eno were the most common musical inspirations. Girls seemed to like Prince more, however.

to 2011, there was nearly a two-fold increase in the amount of times Stevie Nicks was mentioned as an influence.

Music Academy was founded in 1998 and touches down in a different city each year. Over two fortnight-long ‘Terms’, some of the world’s finest purveyors of rhythm and sound gather inside the Academy’s walls. Two groups of successful applicants, themselves representing a diverse range of music styles and methodologies, attend lectures by musical pioneers, and work on their own tunes in custom-built studios. By night, they have the chance to perform in some of the host city’s finest clubs and concert halls.

takes place in New York City, one of the most iconic cities on the planet. NYC has been immortalised in the pantheon of music, incubating genres like hip hop, disco, house, bop, no-wave, and post-punk among others. NYC is inspiration central: a place where people from all nations collide, bringing music, culture, and attitude with them. Music is everywhere, from cars cruising the block banging hip hop mix shows to the indie rock stars of tomorrow mashing drums in East Village practice spaces. Boomboxes blasting Willie Colón soundtrack outdoor domino games, and hipster troubadours play fiddles in the subway while kids shout the words to the latest A$AP Rocky single down the train aisles.

in from 29 countries and six continents, 62 participants will attend RBMA 2012 in New York City.

Various Assets – Not For Sale compilation of 35 tracks produced at RBMA Madrid 2011: http://www.redbullmusicacademy.com/magazine/various-assets

Bob Moog the creator of the unmistakable sounding MOOG Oscillator Synth was featured in an interactive Google Doodle to celebrate his 78th Birthday today. Google impressed me a few weeks back when they featured NYC Disco artists Keith Harring a couple of weeks ago but this topped that with  a pretty cool  functioning Moog emulator that you can still check out HERE.

Also check out this Red Bull Music Lecture with Bob Moog from Capetown as he discusses a very interesting background  on  how he came about inventing the Moog and how it first taken up with musicians.

MadLib..a brother from another planet!

I don’t get into interviews too much when an artist like Madlib is talking.. I cant help but listen..  This cat gets music alright & isn’t too scared to get creative with it either.

Download the full 35-track compilation featuring a taste of the music made at the Red Bull Music Academy during four autumn weeks in Madrid last year. From arpeggiated acid to experimental exotica, these are just some of those once-in-a-lifetime collaborations that made the 2011 Academy in Madrid all so special.

The Various Assets – Not For Salecompilation holds some of the wild juxtapositions and magical moments that happened when people from all corners of the world found companions in sound – and discovered they spoke a similar language despite contrasting backgrounds and methodologies.

Chances are you might hear some of these artists playing a festival or two this year, or dropping an EP that turns your dance floor upside down. If that’s the case, reset your compass points, and join us en route to who knows where. Check the tracklist and download the compilation below. Included in the download is a PDF booklet with the stories behind the songs.

END_OF_DOCUMENT_TOKEN_TO_BE_REPLACED

• CDR is a FREE social event for lovers, and makers, of new music.

• All music played is unreleased and programmed from what is brought down on the night.
• If you make music, then bring a CDR along with you by 9:30pm.

Philosopher, producer, artist, DJ, mentor, label boss – there’s not much that the notorious Kode 9 hasn’t done for electronic dub styles. With an ability to wax lyrical about bass frequencies in a lecture room just as easily as he can unleash it on the crowd, a session on the couch with Kode 9 is frankly not to be missed. As a past Red Bull Music Academy lecturer, Kode 9 will be one of many past Academy participants on hand to discuss what goes on at the Academy and the in-depth application process.