Dust off the platform heels, break out the purple leather overcoat, slide into the denim superflares, drape yourself in rolled gold and stroll down to the sleaziest soulsonic shakedown this side of Harlem circa 1973, ‘cos the huge hit of the BECK’S FESTIVAL BAR 2008 returns to The Basement for one show only on July 16th 2010.

Now it’s time to recreate and revitalise an amazing selection of these Blaxploitation soundtrack soul classics LIVE at the Basement on Friday July 16, while screening classic and rare footage from the original movies.

DJ Stephen Ferris from FBI Radio’s  Funk Flashback will be on hand to drop some crackling old vinyl onto the decks, and the dirty funk will continue late into the night with Professor Groove and The Booty Affair conducting the after party. 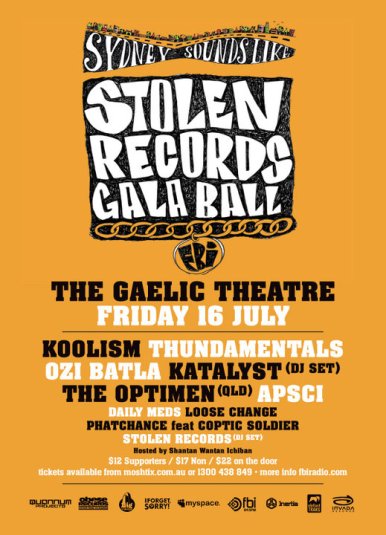 Returning after a sellout show last year during last year’s Save FBi, Sydney’s hip hop community is banding together and donning their finest to bring you the Stolen Records Gala Ball. Hosted by FBi’s own Shantan Wantan Ichiban, dust off your tux and grab a date, we promise a night you won’t forget.


Check out the pics from last years event Vodpod videos no longer available.