A 75min trip through Cosmic Disco, Boogie and even some classic Chicago House vibes. Presented with luv by Sydney based Re-mixer, DJ, Label Owner and Blogger, Sloppy Seconds.

A re-edit label (Sloppy Seconds – get it?).  You can find me digitally on Juno for now.  I do have plans to press up vinyl sometime in the near future.  The material that I plan on using for the vinyl releases will be titles exclusive to the wax catalogue (I have a secret stash saved specifically for this purpose).  I’ll let you all know when that happens.

A music resource website. I’ve been collecting vinyl since the early/mid 80’s and have amassed quite an amount of relatively obscure stuff and started the blog as a way to promote lesser known artists and their releases.  Because of the controversy surrounding mp3s I had originally intended to only post titles that are out of print, but I also realized that there are tons of new releases that are equally as amazing that weren’t being promoted very well.  The music selection there varies greatly and includes just about anything that moves me and/or  makes me laugh.  Here’s the addy.  Make yourselves at home.  Beer is in the fridge.

(For the record, I have received numerous emails stating that purchases of posted material were made due to promotion of said titles from the blog.)

And a DJ.  I’ve been DJing for quite some time now.  Most of you have never heard of me, which might have something to do with the severe lack of self promotion over the years – I never liked that part of the job, but I’ve come to the conclusion that the self promotion game needed to be stepped up if I wanted to continue to do this. 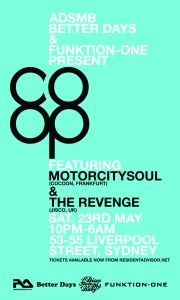 Here is a warm up for the upcoming Sydney show, this is a hot mix by The Revenge featuring some unreleased tunes & some well known signature gems.

Hercules and Love Affair are an amazing DISCO &  FUNK  group based in New York & signed to DFA Records. Their self-titled album is one of our stand out album from 2008.

Here are some of our favourite Hercules & Love Affair releases: