Nickodemus’ first musical love has been hip-hop – in large part because of hip-hop’s ability to convey a poignant social commentary through lyrics and production. This is what drew him and Justin Carty together to form the project “A New York Minute,” released in May 2011 to critical acclaim. The project brought together the top talent in New York City’s underground hip-hop culture The Real Live Show, Rabbi Darkside & iLLspokinN – as well as legendaryMC Sadat X (Brand Nubian) to do a track and video inspired by the uprisings in the Arab world, the Wisconsin labor strikes & the possibility of the same tipping point in NYC. Nickodemus and Carty always envisioned a continuation of the “A New York Minute “to be “A Global Minute” and the opportunity presented itself in September of 2011 when a musical DJ collective The Beirut Groove Collective, and Jembe Music invited Nickodemus to Beirut – one of the cities most associated with the turbulence of modern Middle East history and a city that has held a special place in hip-hop lore for decades. The hub of the burgeoning Arab hip-hop movement, Beirut has gone largely unnoticed as the uprisings in the Middle East have taken on despots, dictators and monarchs with unflinching bravery and ingenuity. Beirut’s fight, however, is one that represents Arab struggles on many fronts.

“A Beirut Minute” video/song will help illustrate why Lebanon is a country still recovering from a devastating 1975-1990 Civil War and more recently the War versus Israel in 2006, despite it being a top tourist destination over the last 3 years. Through A Beirut Minute people will be viewing Beirut through the lyrical talents of four of the finest Arab MCs on the scene today including, Edd Fareeq l’Atrash, Yaseen, Malikah (who’s worked with everyone from Nate Dogg to Cheb Mami) & Ram6 Hamorabi, rhyming over a raw 70’s style drum-break & flipping to a Middle-Eastern Tarab-sampling Hip-hop beat. Vocal version & an instrumental included.

Its official, REAL MUSIC IS UNIVERSAL!

Our good mate James Locksmith of JembeMusic put me on to this dope event on this weekend in Beirut where a posse of SOUL, FUNK & Rare Groove fans are throwing it down in homage to the musical legacy of James Brown at the annual ‘Black Christmas‘. 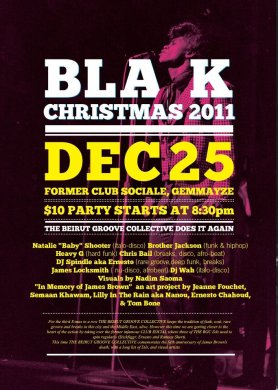 (In Memory of the Fifth Anniversary of JAMES BROWN’s Death)

For the third X-mas in a row THE BEIRUT GROOVE COLLECTIVE keeps the tradition of funk, soul, rare groove and breaks in this city and the Middle East, alive. However this time we are getting closer to the heart of the action by taking over the former infamous CLUB SOCIAL where three of THE BGC DJs used to spin regularly (DJ Stickfiggr, Ernesto and Ramsay Short).
This time THE BEIRUT GROOVE COLLECTIVE commemorate the fifth anniversary of James Brown’s death, with long list of DJs, artists and visual artists. To top it all off, this year Supreme Sandwiches and Samosas will be on sale from Firas Yatbokh!

“In Memory of James Brown” an art project by Tom Bone,Jeanne Fouchet, Semaan Khawam, Lilly in the rain aka Nanou, Ernesto and short fuse.

We are absolutely loving the latest @thecheatcoders Podcast with @mirrahreflects having a relaxed chat about her amazing journey in music from her early days around London’s Hip Hop Scene, a friendship with Flavor Flav & touring with Public Enemy working with the likes of; MC Lyte, TLC, Method Man & Murder Inc as a dancer & artist & to coming back to Australia & working with L-FRESH The LION & her new own solo musical projects.
Can’t believe this was 4 years ago. ☔️What a blessing it was to be in the presence of greatness for the PIANO & MICROPHONE TOUR back in 2016. This live show will stick with me forever and ever, I had seen Prince before in larger shows with his full band, but I honestly wasn’t ready for the levels he took it to in this show. I knew it would be good, but wasn’t expecting to be sitting there at the end of the show blown away by the sheer musical talent i just witnessed. I remember thinking that this man was sent from another planet and it was his destiny to move the world with his art. This totally changed the way I listen to music like only one of the greats can 🎶
NOW STREAMING: ❤️🎶 our VALENTINES DAY playlist with some of our favourite SOUL, JAZZ, R&B joints hand picked especially with YOU & YOUR LOVED ONE in mind this Valentine’s Day. 📻 Listen to it streaming right now on our #spotify. Featuring music by Jill Scott, Prince, Maxwell, D'aneglo, Angie Stone, Raphael Saadiq, Erykah Badu,Marvin Gaye, Lauryn Hill, Aretha Franklin, Whitney Houston, Al Green, John Legend & more. #valentinesday #neosoul #soulofsydney #jazz #soul #funk #rnb #r&b #music #slowjams #podcast #stvalentinesday #valentines #jillscottflow
Big ups to the true believers doing it for DISCO & today. See you from 2pm today, Set times are below 2:00 - 4:00 PM - PARIS GROOVESCOOTER 4:00 - 5:30 PM - PHIL TOKE 5:30 - CLOSE - JOHN MORALES Hosted by MC MIRRAH We have moved dancefloor areas inside undercover out of the rain so we can party in comfort. This is a FUNDRAISER JAM so we are still selling the last few tix online via the link below if anyone would like to join us :) ★ Tickets via link ★ www.facebook.com/events/580668552715403/ ★ www.funkfundraiser.eventbrite.com.au
Massive LOVE to the TRUE BELIEVES who snapped up space on the dance floor tomorrow. The VENUE DETAILS, SET TIMES & PARTY INFO have been EMAILED to all ticket holders. Please Check your Email (and spam, junk, promotion) folders for all info. If you have purchased a ticket and yet to received, please email us with your booking confirmation at soulofsydney@gmail.com. The venue is 18+ and all dancefloor areas are undercover for this one. We don't mind a bit of rain, but it's probably better we move under some cover for this one so we can party in comfort. Tix and info https://funkfundraiser.eventbrite.com.au
We are honoured to welcome New York DISCO legend JOHN MORALES back to Sydney for this Sunday’s funk fundraiser jam (for NSW bushfires). With over 500+ tracks to his name, The signature JOHN MORALES sound has been the shaping DISCO, BOOGIE & SOULFUL dancefloors for generations since the 1970’s & he has been the benchmark for PRODUCERS, DJ’s & DANCERS alike. We can’t wait to have him in town for this Sunday’s jam, join us from 2pm for a very special Sunday afternoon of DISCO FUNK as we get together and dance to help raise money for communities affected by the recent bushfires. Tix and info at Facebook.com/soulofsydney or click link on bio. // #johnmorales #disco #rollerboogie #soul #soulofsydney #sydneymusic
%d bloggers like this: