SOUL POWER: Erykah Badu & Miss Jill Scott filled us with love this morning with their all queen’s IG Battle. Love it when good music brings the world together.

A little moment in music when two QUEENS came together to show the world how it should be done. The music was amazing, but it was their interactions between each other that put the biggest smile on our faces, loved how close they are & how much positivity they give each other.

This was pure magic, Jill Scott was scheduled to play later this month at Jill Scott | Vivid LIVE – 22, 23 & 25, 26 May. I only hope this gets rescheduled once things get back to normality.

The tune was inspired by my and guitarist John Lynch’s hangs on Frenchmen Street during tour stops in New Orleans. The tune features Jesse Blum of the MisterWives on trumpet, Russ Paladino on sax, and “Organ Monk” Greg Lewis on the B3 organ.

This is a feel good song that everyone needs to hear right now in a feel bad time!

Stay safe & check out more from DLG via links below:

Sooner or Later from Nyah Grace’s debut album titled HONEY-COLOURED which is due out very soon.

Originally from the depths of rural Oregon, Nyah grew up listening to Lauryn Hill, D’Angelo and Estelle, artists whose neo-soul sound echoes the jazzy chord progressions of those early icons she admired, like Billie Holiday.

Nyah wanted to be a singer “but didn’t think it was a rational dream” until her Manager came on-board and introduced her to Steve Chrisanthou, the Grammy, Ivor Novello, BRIT and MOBO nominated producer/songwriter who is best known for his work with Corinne Bailey Rae and Lianne La Havas.

Now residing in the UK, she has found her musical home, and with her debut album “HONEY-COLOURED” Ms Grace with her young band are ready to take the stage. A cool, subtle Neo-soul vibe with delicious hints of jazz is awash with hooks destined to capture ears eager to hear some fresh new sounds.

Check out more via links below
https://www.nyahgrace.com/

Sydney soul artist MIKE CHAMPION used some of this time in lockdown to put together this crafty new video release.

LONG STATUS ALERT🚨🙏🏾 Are we losing our minds in Lockdown? If I completely lose my mind I‘ll be more then grateful for the opportunity God has given me to create a new better, bolder, more committed, more selfless mind to explore the new world with! Here’s sending my people more life, more power.

I don’t know what compelled me to write and record a rap verse. I’m not a rapper. Something about those Kaytranada drums brought out the bars in me 😆 (This is his beat I just borrowed it🙌🏾). Or maybe it was hearing these remarkable words from the forever inspiring Russell Brand while scrolling through the gram.🤯🙌🏾

Big Up the CottonBro fam for the collabo as well📹🔥. If this time has taught me anything thus far, it’s that we shouldn’t be afraid to be who we truly are in every situation life brings our way. The World as we’ve known it is ending because a New World is what we need. A world of love and patience and gratitude for the things that really matter. It’s important this approach stems from the bottom up and not the other way around. The Power is with we the people.

I’m striving to believe in my own power from this point on in and If I happen to slip back into to old ways of thinking, please somebody hold me accountable! 🙏🏾 2020. Has been a much needed lesson for me, for us, for humanity. I know many people have lost lives, loved ones, lost jobs and income, lost out on opportunities to travel (me and my family included). It’s clear we have experienced great loss as a people. But with great loss there is always greatness to be gained moving forward. Great struggle creates even greater strength. I know we will be better because of this. We can only move towards being more together as a people of the Earth coming out of this. This is why for me holistically 2020 has been a Great Year! Let me know in the comments what’s been great about 2020 for you fam? “ILY❤️.Yours Sincerely,

Sydney Funk & Hip Hop collective RENEGADE FUNKTRAIN formed back in 1994 and made pretty dope music for the short time they were around infusing heavy live grooves with the full band & live scratching & MC’s like no not many others were doing at the time. We loved this band back in the high-school days, wish they put out a few more releases.

From memory only released one self-titled album in 1995 & a couple of singles, some of which we still play at our parties today.

This is a clip of them doing their it large with the full band live on Recovery on a Saturday morning back in 1996. You can see brother and sister Rosano & Tina Martinez up front on vocals, DJ ASK adding cuts and the band Dereck Antunes (on drums) alongside Juan Gonzalez (keyboard) and Adam Dehnem on Bass.

We cant wait to put it in a podcast and share in the next few weeks.

We will be dropping something on our Soundcloud page soon HERE

We were so happy to find this promo mix on Mixcloud. Back in 2005, Nick Toth threw this killer club night at Candys Apartment in Kings Cross which was focused on playing a bit more 1980’s inspired boogie sound. It was so dope, I was lucky enough to find it by chance and was so blown away hearing that boogie sound on a proper sound system. We were always into funk and disco, but it was pretty rare to hear Boogie stuff in Sydney, especially in a dancefloor setting. This is a promo mix NICK TOTH, REGAL & BLAZE put together for this show which features a stack of disco-rap, boogie & funk joints that are still personal favourites.

Check it out and more mixes at link below 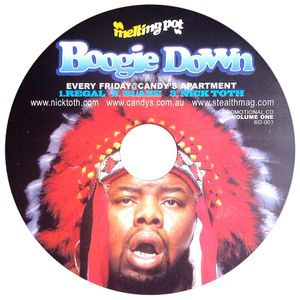 A classic recording from the archives of ground breaking Hip Hop radio show DROPPIN’ SCIENCE which was on 2ser (107.3 FM) back in the late ’90s. This one is a dope high-powered funk mix from PABLO of The Psychonauts (UK), recorded back in March 1999.

We got to say these dudes were one of the first funk outfits we saw getting out in Sydney & they were so bloody good. Once of the wildest live shows jam packed with heavy funk and hip hop grooves perfect for a dacefloor. We always wanted to book them at a party but they pretty much stopped doing gigs about the time we started doing our own jams. The band members are still pretty active around the scene, but sadly it doesnt look like King Farook are still doing shows these days, if they were we would have them front and centre at Soul of Sydney.

Stylistic boundaries are becoming increasingly blurred in today’s musical melting pot, and King Farook are at the vanguard as they pioneer a genre all their own. With an appeal that cuts across styles as diverse as Funk, Rock, Hip-hop, Soul, Jazz, RnB, Latin and even Metal, they have a fan base just as varied. Their unique sound, intense energy and masterful delivery will captivate you no matter where your tastes lie.

Kicking off 2007 with a slam-dunk New Years Eve performance at Peats Ridge Festival, it became clear that their massive sound demanded an equally big stage. They’ve since headlined at a range of festivals including Dreamfest Newtown, Surry Hills Festival, Feelgood Festival and Glebe Street Fair, as well as show-stopping performances at the Rhino Urban Music Awards and MusicOz Awards. All up, they tallied a total of 75 shows throughout the year with highlights including:

– A massive series of sell-out shows in Sydney, including The Annandale Hotel (twice), Will & Toby’s, Civic Theatre, Spectrum and The Vanguard.
– Reviewed as “Performance Highlight” of 2007 Rhino Urban Music Awards at Luna Park.
– Cover story on Sydney Morning Herald Metro Magazine, headlined as the “Next Big Things”.
– Launched their Single Zabbadouai (Back In The Day) to a sell-out crowd at The Vanguard with special guest John Blackwell (drummer for Prince and Justin Timberlake) in the Encore performance.
– Featured on the cover of Drum Media magazine and nominated for Best Urban Single and Artist of the Year at the 2007 MusicOz Awards, where they closed the show at the Enmore Theatre and rocked the Home Nightclub after party.
– First ever act to sell out Sydney venue Will and Toby’s in presales alone.
– Highly acclaimed and successful 2 month midweek residency at Newtown’s Sandringham Hotel.
– Sold thousands of copies of their debut album Land Of The Horny via their own website.
– Solid touring schedule, with regular sell-out shows in capitals and regional centres.Shared the stage with fantastic bands such as De La Soul, Bluejuice, True Live, Butterfingers, Figgkid and many more.

You know we all love a bit of GOSPEL music, especially when it in the form of great mix like this from our brother local crate digger, DJ & goodfriend GIAN ARPINO. He diggings very deep for this the special GOSPEL EDITION Vol 3 of the Collected Rhythms Series this time bringing you some favourite gospel platters I have amassed over the last few years.