Since the recent release of her debut album Dawn (HopeStreet Recordings), Emma Donovan has played some of Australia’s biggest stages and received praise from around the world. The Indigenous country-turned-soul singer has just launched a brand new website and is hitting the road on Paul Kelly’s Merri Soul Sessions tour with her band The PutBacks.

Emma has a lifetime of musical experience to draw upon. At age 7 she began singing with her grandparents in Australian country/gospel group The Donovans before studying contemporary music in her late teens. As a young adult, Emma added a newfound love of soul, blues and roots to her already rich musical heritage.

Emma’s much-deserved recognition has been catalysed by her recent album with The PutBacks, released November 2014. The 9-track record screams her brutally honest lyrics backed by the bands gritty soul instrumentals. Influence from Aretha Franklin, Sharon Jones and Stax Records can be heard in the songwriting and production. Rolling Stone Magazine rated the album 4 stars and Paul Kelly described her musical relationship with The PutBacks as “sass and kiss, twist and twine like a totally-into-each-other feisty couple. Dawn is the perfect marriage of singer and band.”

To celebrate this feisty relationship, a full production video clip was released for the lead single Dawn starring Tina De Melo & Rhimi Johnson Page. Directed by Natasha Gadd of Daybreak Films, Emma describes Dawn as “some personal stories I needed to share, but from that hard place I ended up in the sweet Dawn – a brand new day".

In addition to her own shows with The PutBacks where they’ve graced the the main stages at WOMADelaie and St Kilda Festivals, to name a few, Emma has also collaborated with many other renowned artists in the past 12 months. She has toured with the Indigenous music, dance and comedy show Blak Cabaret, become a huge part of Declan Kelly’s Diesel N’ Dub showand featured in The Black Arm Band’s Dirtsong show.

Emma Donovan & The PutBacks are currently on tour with Paul Kelly.

See her new website for all the details – emmadonovan.com

Watch the video for ‘Dawn’ at youtu.be/wJdAPFxIvVM 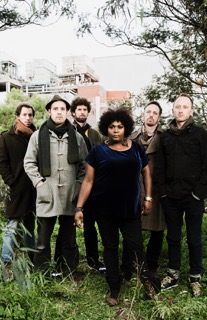 “Driven by brutally honest lyricism, irresistible percussion and a purist’s respect for the funk and soul tradition, Dawn hearkens back to the heyday of Stax and Atlantic Recordings” – Karaslamb (Okayplayer)

“Emma Donovan’s undeniable deep soul voice has met its match at last in The Putbacks. They sass and kiss, twist and twine like a totally-into-each-other feisty couple. Dawn is the perfect marriage of singer and band.” – Paul Kelly