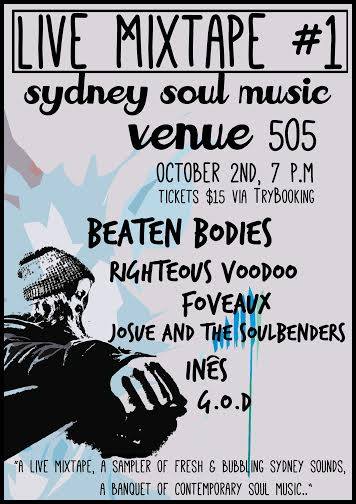 BEATEN BODIES
Inspired by the current musical climate and with a growing need to experiment Beaten Bodies occupy a space somewhere between the dank hip hop beats of The Robert Glasper Experiment and the neo soul grooves of Erykah Badu.

INÊS
Born in Portugal and raised in Australia’s sunburnt lands Inês embodies all the sensual exoticisms of a European goddess and all the blatant upfront no-bullshit characteristics of a people who descended from thieves and cutthroats. A futuristic exploration of sounds from the past – jazz, soul, rhythm and blues.

G.O.D
Boom bap daboom bap. G.O.D. make beats. About to release a mixtape of 3 EPs, they have just recorded their second mixtape. Featuring Ross Ferraro on drum sounds, Jarrol Renaud on low frequency sounds, and Dave Rodriguez making sure his guitar doesn’t sound like a guitar.

FOVEAUX
Drawing from elements of Soul, Jazz, R&B, and Funk, Foveaux forge a progressive sound that grooves from top to tail.

JOSUE AND THE SOULBENDERS
Sydney based soul collective complete with killer grooves and explosive live shows. Led and fronted by Josue Vilches.

RIGHTEOUS VOODOO
Righteous Voodoo is a Soul-infused, extravaganza of sound, who will be sure to get even the most conservative toes tapping. Their sound is forged in groove and founded in Roots music. Real music, played by real musicians.

Beaten Bodies EP ‘The Royal Road’ is available now via iTunes, with physical copies available at the band’s shows.