Summer of 2011 was a very busy time for the Funkdafied team, and this year is promising to be an even bigger year for our musical indulgence. Because of your continuing support that never fails to inspire us collectively, and our mutual love for quality music, we are very excited to announce a special event. You were there from the beginning and now we’re bringing it all back to where the parties first began!

Funkdafied and DigDeep Promotions have once again teamed up to create the 5th installment of High Flyers Little Secret on the 23rd of June, with an impressive line-up of international and local artists. We have a few surprises up our sleeve, after all, what’s a secret if we tell you everything in one go?  What we can disclose is that we have one of the best turntablists in the world – MR THING, a former DMC Champion and world famous Crate Digger is spinning tracks in the Funkdafied room. Joining him will be the one and only DJ HUDGE, a man with 20 years experience internationally renowned for his diverse taste in music that has seen him travel the world over. In the House Room will be legendary House music connoisseur, UK’s GRAEME PARK!

Individually, their encyclopedic knowledge spans across burgeoning periods in music’s history, witnessing the evolution of their own musical genres intensify globally. We’re all in for something quite special!

Mr. Thing aka Mark Bowles first played out at Funky Buddha parties at the Tunbridge Wells Forum. He was soon became an original ‘Scratch Pervert’ along with Tony, Joel, and Paul. In 1999 this crew one the World DMC team championships (that years final was in New York)

With various highly acclaimed albums under his belt including albums on the BBE Label ‘The Kings Of Hip Hop CD 2 – with DJ Premier’ and also ‘Strange Breaks & Mr Thing. Having collaborated with Yungun on numerous projects, the pair have forged a strong partnership on record and on stage. Having just released their second white label together – Jackin 4 Breaks, the pair are also working on a collaboration mixtape as well as their album “GMB (Grown Man Business)” released on Silent Soundz. GMB showcases the diversity of Mr. Thing’s production prowess that needs to be seen.

With 20 years under his belt as a turntablist cementing his position as the main DJ for the UK B-Boy Championships 6 years in a row. As an international DJ, Hudge has been around the world playing at major festivals, clubs, and beach parties that only a handful of lucky people have experienced. His love for Hip Hop has seen him share the stage with legendary artists such as Kurtis Blow, Kool Herc, The Scratch Perverts, Afrika Islam, Schooly D, Rahzel, Corrine Bailey Rae and a host of other artists.

Graeme Park has seen it all! Some describe him as having a doctorate in dance music. His career spans over 25 years of industry experience as a DJ, radio host, shadowing the evolution of dance/club culture. From humble beginnings working at a record store in the early eighties, his passion for emerging dance music gained him a strong reputation that paved the way for an influential career in the music industry. His residencies include The Hacienda and Summer Love, traveling the world exhaustively exposing dance music to the masses. Playing across the UK, Chicago, Detroit, New York, major festivals, clubs and arenas, Graeme was one of the first British DJs to play places like Australia, South America, the USA, Asia and beyond as well as producing and remixing tracks for the dancefloor.

Full Line up so Far:

More international DJ’s to be added to the lineup and all information to be released soon!

Sun Studios has effectively remained one of Sydney’s diamond in the rough, a hidden oasis paradoxically filled with concrete, steel, high ceilings, spacious interiors, the right amount of flora, and plenty of parking for designated drivers.

It’s an alluring space made for warehouse parties, for those that know their music like it was an extension of themselves. For you, we searched high and low determined to bring Sydney a place where shared beliefs create a sense of belonging and it’s our little secret!

We hope you can all make it for what we’re hoping will be our biggest and best warehouse event so far. We have a massive production going into this one, and we look forward to seeing you all on the Dance Floor.

Please note first release tickets will only be on sale for a short time, so get in early to avoid disappointment! 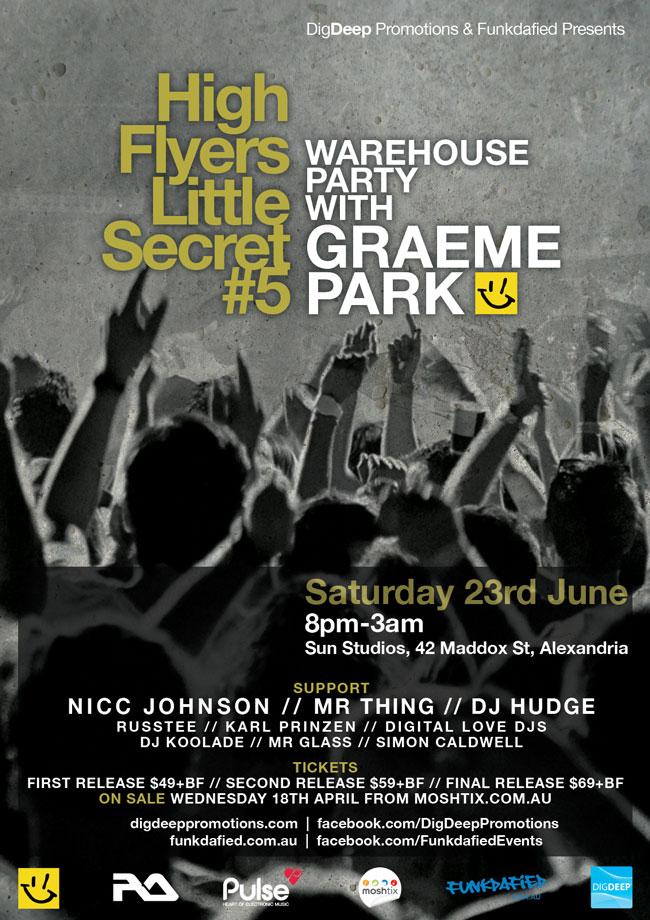